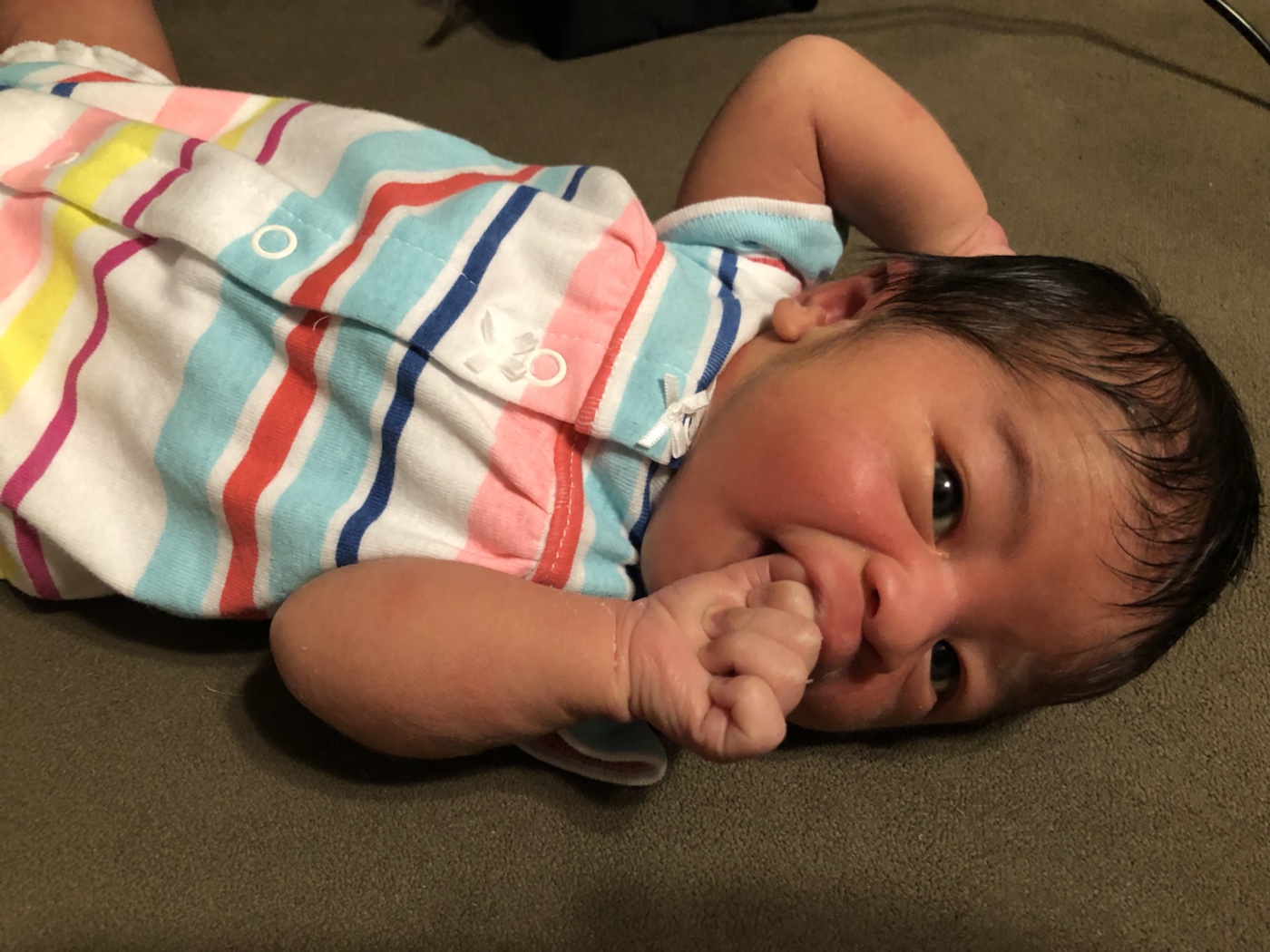 It’s been a LONG time since I posted here but wanted to wait until I had more substance to write about. Today marks two weeks since becoming a father to my beautiful daughter Emery.

This blog is probably aimed more at dad’s to be. Everybody’s experiences are different but here’s a little glimpse of what has happened in the last 14 magical days of my life. Let’s catch up…..

The night before Emery arrived, I slept for maybe 30 minutes total. I remember the staff at Wesley telling us to make sure we got some rest. Yeah right! My nerves were at an all time high. Have you ever arrived home drunk and thought you were going to puke all night? That was the feeling I had all evening. It would only progress the next morning before we left for the hospital.

When we arrived at the hospital, we had to go through all the paperwork and warnings from the nurses and doctors. I sat there and listened to all the dangers on the anesthesia, medicine, surgery and more. It was their job to make sure we knew all the dangers but it was the most pessimistic hour of my life. It was essentially them saying “Well, there’s a chance she’s going to die so just be aware of that.” So there I was already nervous and then they throw all that on top of me. Insert: stomach ache.

Later on, I get changed into my little blue gown and things were really starting to set in. They wheeled my girlfriend into the operating room and started on the anesthesia. It was at this time my girlfriend started to get tear up. Just the last nine months of wait, dreaming, wondering and there we were. As I wiped the tears from her eyes, I was biting my lip because I felt like I was going to get emotional too but wanted to stay strong.

There I was sitting behind the curtain and the doctors started making the incisions. They were talking us through everything and I was just trying to make sure I didn’t see a thing. My number one fear going into that day? Passing out. I’m not one for gore and had I saw that, it wouldn’t have ended well for me.

The only line I remember vividly hearing was, “She’s a little stubborn!” We can probably blame that on me.

Minutes go by and we are sitting in silence. Then all of the sudden, I hear “waaaaaaahhhhhhhh!” There was no fighting it anymore……tears fell immediately from my face. All the months of pressure I had felt was finally lifted. Our baby had come into this world.

Doctor Christman held her over the curtain for us to see her. I remember two things, her eyes were really sunken in and she had hair all over her head, back and shoulders. For a split second, I thought my girlfriend cheated on me with a caveman. I would be informed the eyes would settle down and the hair would fall off.

I was able to hold her for an hour while the doctors finished everything with my girlfriend. I didn’t know what to do or say, I just say there and stared as she cried in my arms the whole time. I get it though, my mug isn’t the prettiest thing in the world. 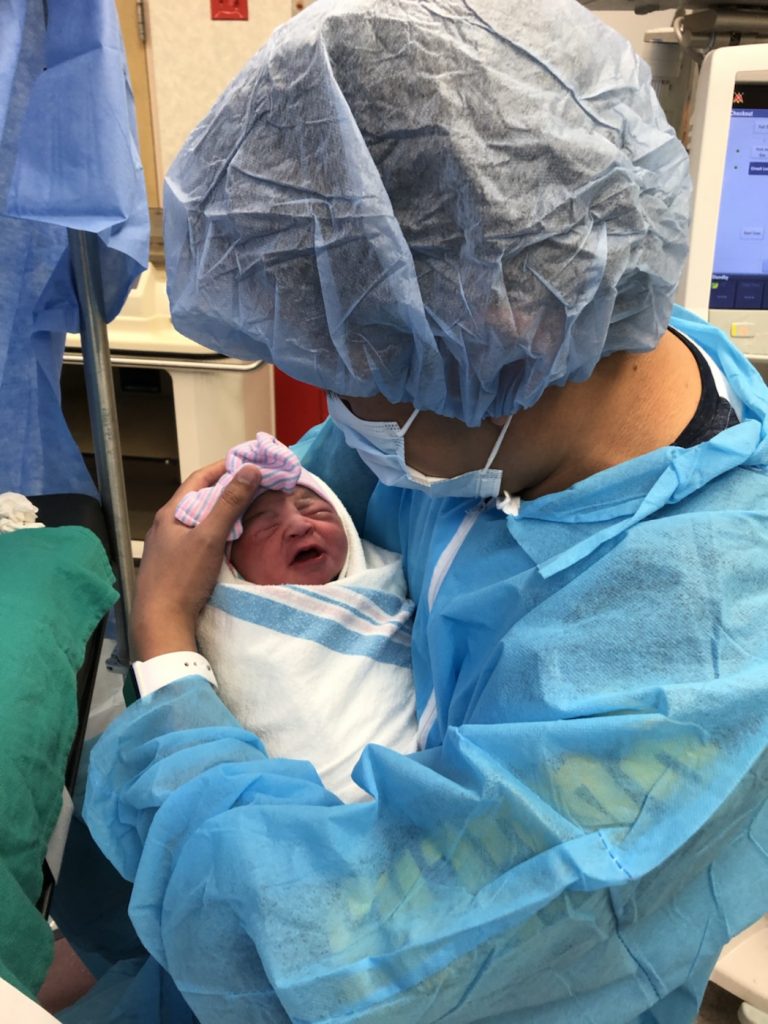 The Next Couple Days

I’m not going to lie, the couple days in the hospital are ROUGH! My girlfriend said it’d be OK to leave, nap and shower if I wanted to but I wanted to be there the whole time. The food was less than stellar so the only times I stepped away was to walk across the street to Walgreen’s or a fast food spot to get some grub for us.

For the next 48 hours, our days and nights were filled with constant knocks on the doors for baby checks, house keeping, visitors, doctor visits, etc. I know they were just doing their job but it definitely prevents you from getting any sort of rest. It’s like you’re in a reality show like Big Brother and constantly being woken up. The first two evenings, Emery refused to sleep. I’m used to getting little sleep in general but this was a whole other level. I might have slept a total of an hour or two in those first 48 hours. It’s brutal…..just brutal. I even googled consequences of sleep deprivation at one point.

She would cry for so many hours. From my perspective, I felt so helpless. I had no idea what to do but the nurses were there every step of the way. If I was a pope, I’d anoint them as saints. They did their best to make our stay as comfortable as possible.

Finally they let us go home. I was so ready. 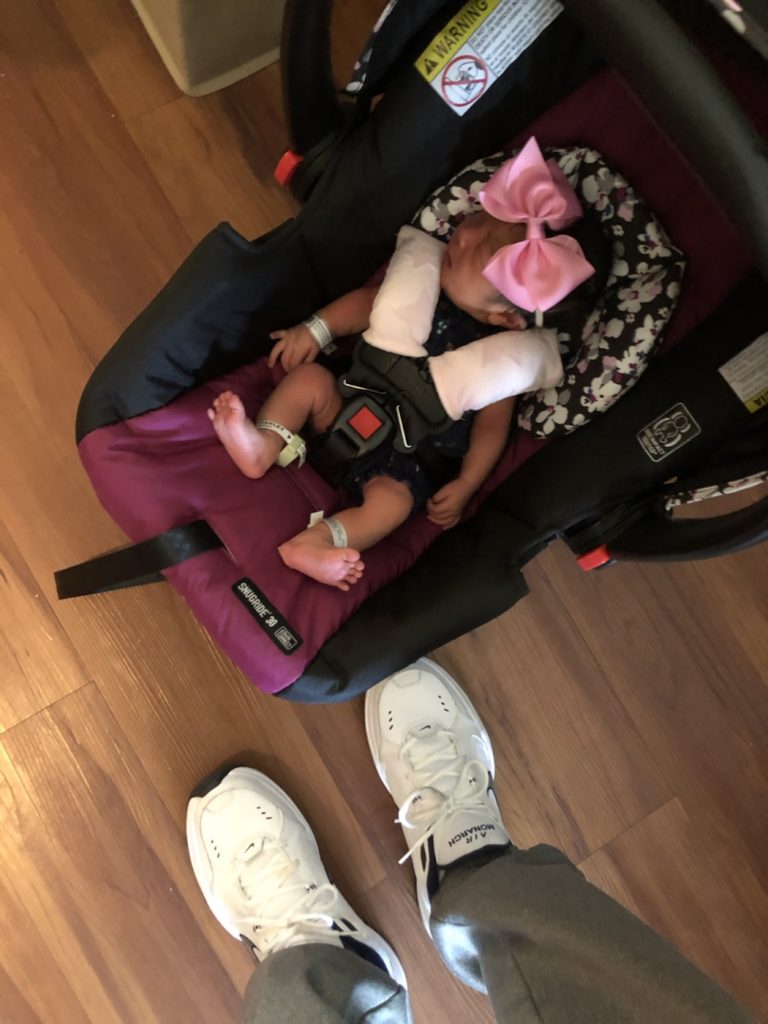 I’ve been told it doesn’t hit you until you’re in the car taking her home. I didn’t get that feeling. For me, it hit me the first night in the hospital when the three of us were by each other in the room. When I arrived home, it wasn’t any sudden realization either. Just a feeling of, “Hey this is the next chapter of life. Let’s rock it.”

Since then, I’ve been able to spend lots of time with my daughter, immerse myself in the world of changing diapers and spend hours just staring at her. There have been plenty of nights I’ve slept sitting up, on my knees sleeping with my head on the couch edge of the bed making sure she doesn’t cry, been up until 3, 4, and 5am wondering what’s going on. But you know what? It’s all been worth it.

Aside from the bad there have been more wins. The first night she slept for more than three hours was like Michael Jordan winning his sixth ring. Seeing her kick tummy time in the butt and moving her head from side to side was like watching your child walk at graduation. Listening to her sneeze is just the cutest thing in the world.

But ultimately seeing this face brings more joy and love inside me than anything else I’ve ever been a part of.

Every single bit of advice or thing to prepare for or expect was all false. Nothing anybody tells you can prepare you for what’s to come or what you’ll be feeling.

All I know is I’ve become that parent I used to make fun of. I take hundreds of pictures, I give her hundreds of kisses every day, I lay right by her and stare at her for hours. I tear up sometimes just watching her gaze at me and attempt to give some toothless grin. I sing to her at night. Give her eskimo kisses. Read to her even when she’s clueless. Wince as I take off her diaper not knowing what kind of poop to expect. And worry when she cries loudly as I put her in the car seat. I’m definitely not the stereotypical tough guy dad. My style is more like Phil Dunphy on Modern Family.

People have asked me how I’ve changed or what I have thought since becoming a dad or is it everything I thought it’d be.

It’s hard to put into words. I’ve never had that feeling this intense feeling of love and admiration for anybody. Don’t get me wrong, I love those close to me but I keep it more to myself. I’m not one to really say the word love or get mushy or into PDA’s or even hugging people. Holding hands is a no-no for me and the sappy stuff makes me sick. But with this girl, she’s my everything. She can fart in my face, puke on me, slobber all over my face, cry bloody murder at 4am but I suppose that’s what being a dad is all about. The unconditional love where nothing else matters but that child.

Being a dad isn’t everything I thought it’d be, it’s been so much more than that. In these short two weeks, I have been the happiest I’ve been in my entire life. I only hope I can continue to make her proud. Now excuse me as I go stare away at my child……