I first became a dad at age 30, but I want to back it up to when I first wanted to be a dad at 26. My wife and I had been married for 4 years and were ready to settle down and finally start a family. It seemed so easy, we had years of practice of course.  As it turned out for us it wasn’t easy. We tried constantly for 3 years and nothing. We went to the doctor to make sure it wasn’t one of us, we ate better, did acupuncture, watched our friends and loved ones have kids of their own just hoping it would be us next.  We got the irritating “when are we going to be grandparents?” constantly from our own parents.   NOTHING!  All I wanted to do was be a dad!  Then finally 3 years later over Labor Day weekend 2008 we were just over it and went out and bought a kegerator that Sunday and came home to sit on the back porch to christen it, and my wife started to get a severe sinus infection which was very odd for her. She decided on a whim to just do a pregnancy test the next day and BAM Prego!

The sigh of relief was over, and the excitement and anxiety began.  Excitement because I had hoped for this for so long, and of course anxiety of what did I just do. Thru the next few months everything was going great, we found out the sex, were able to wrap up that pic and give it to our parents for Christmas.  I turned 30 in February 2009, and we were checking things off our list for our May baby. May came and on May 28th our son Tommy came into the world.

As soon as he came into the world my heart melted.  I was so in love, terrified, happy, but in love.  The next two years were a whirlwind of new and different things.  In our mind’s things could not get more perfect.  We evolved from all night partying to sleeping from 10 pm -6 am every morning, he was just that good of a baby.

Two years later here came our second one, Sawyer.  Sawyer was not planned at all, and until this day I thank two friends for getting married because of them we were to be parents yet again.  In a way we found it weird, it took us so long to get our first and then WHAM here comes the second.  Sawyer arrived May 5th, 2011, and everything he did was the opposite of Tommy. Tommy waited until the last minute and although only a 3-hour delivery process, Sawyer decided he needed to make his exit on his due date May 5th and then also decided he wasn’t going to even let us get to the hospital.  I delivered my second son at home well mostly.  He came in 15 minute and was head out when the firefighters got to our home.  They, of course, practice for these things but it was a first for all of them.  Tommy’s godmother was there to hold my wife’s hand while I was holding my kid and the firefighters were doing their job.  Sawyer was a handful, I remember countless nights rocking, feeding, doing everything we could to get him to stop crying.  After 6 months he settled into his routine but to this day he does everything his way. 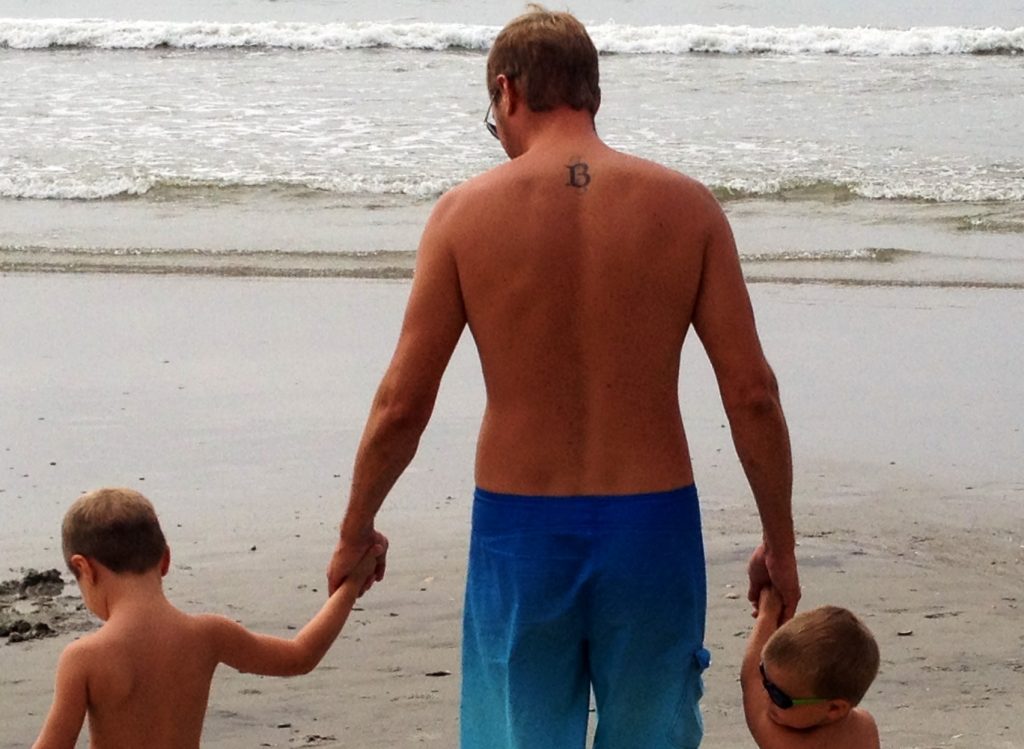 Turning into a dad was the most amazing thing that ever happened to me, but it was also a game changer. Going from doing what I want when I want was over.  When our group of friends called during the week or weekend pre-kid we went out, had fun, did IHOP at 3 am, did it all again the next day.  That isn’t to say it all stopped once we had kids eventually, we still got out, had adult time, returned home.  Thru the years though, our friends without kids slowly stopped calling or texting as much and at first was hard but I look back and think now how glad I was too be at home for that first crawl, words, and walking.   We eventually started hanging out with new friends who were new parents and it has become a way of life.

I am the dad who works hard to play hard with his kids. I did the dirty work, if it required me spending 3 hours up at night to let my wife sleep I did it.  I took them to the park when she was getting her Masters at WSU so she could study, I changed dirty diapers, helped clean the house, fed, bathed, and was in my opinion part of the job, no special pat on the back required, I signed up for it and I am here to do it.

Almost ten years later I still do everything I can with my two sons.  It is crazy to see them go from diapers to riding four-wheelers around the property, swimming, excelling at sports and school, and maturing in their own ways.  I often think that ten years went by fast, my oldest will graduate in 9 years and my youngest in 11.  Then what?  I am so used to being there for them what will life be like post kids?  That’s how fast it really does go!

I am now 39 and turn 40 here in a few weeks.  My encouragement for new dads or soon to be dads is this. Don’t spend an extra minute on things that don’t matter. Be there for your kids. When they ask you to go on bike rides, throw the ball, fish, help mow, wrestle, or read a book do it. I know you are tired, trust me I get it but if you don’t do those things you will regret it later. Be the dad that is silly, kind, strict, and loving and there for them.

I was fortunate enough to be raised by a great dad so from the beginning I thought I knew how to do this, but I still look to him for advice and encouragement. One thing that I took away from my own dad is something so simple, every night before bed I kiss my boys on the cheek and hug them.  My dad did this with me from the time I was little until I was in high school, and until this day we hug one another when we see each other.  Do those little things in your own way and you will be a successful father.